Room to Move : A Description of an Exercise 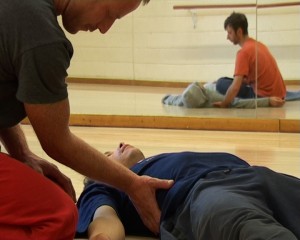 Lying on your back.

Leave the skin to do the work of containing, so that the muscles can release and the bones drift apart.

Let the body spread into the ground in the way that a pool of oil spreads: from the centre out into the constantly expanding periphery—not pushing, but releasing into all the increasingly available space.

The centre and the periphery remain connected through the whole body— a single expanding form.

Notice how the breath informs this sense of spreading: expanding from and contracting back toward your centre.

Begin to move with the image of collecting and releasing the “limbs”—legs, arms, spine. First gathering the limbs together as a way of moving onto your side. Then releasing them all back to the floor. Can you do less and observe more?

Continue moving with this image of gathering and releasing the limbs into and out of the centre. Each time you release them, allow the body to spread a little more—from the centre out into the floor and the space.Breathing.

Continue with a partner. One person moves while the other observes. The observer maintains their own sense of expansion and breath.

How can the whole body be engaged in this observation? Notice the feedback in your own body as you observe your partner moving. Stay close to them as they fold and expand from place to place.

As the observer, start to bring your hands to your partner—big spreading hands laid on the body. The hands are passengers on your partner’s body–not implying or asking for anything, but simply noticing the feedback—from your periphery back into your centre.

Elbows and shoulders remain soft as you notice any sense of your centre being affected by your partner as you lay your hands on their body.

Your hands leave space for your partner to expand.

Your partner might feel the invitation to expand that the hands offer.

The hands remain soft and open, spreading and mobile.

The resistance is an offering rather than an instruction.

Your partner can expand fully into the resistance.

After a time, you can play with increasing (and decreasing) the resistance—always listening to what you perceive is the appetite of your partner. More of the body may get drawn into this exploration, but let the focus remain: expansion and offering space for expansion.

Switch roles.Then both of you can participate in the exercise, taking both roles simultaneously—mover and follower. More of the body gets involved. Surfaces are offered and spread into.

The last part of the exercise involves taking the hands out of the equation. Two bodies expanding into each other, working between offering space and resistance.

This article was originally published in Contact Quarterly Magazine.